The language to be used

For this project, I will be using the Python language to discuss the implementation of ifunc-capable software. The ifunc capability is a feature that allows users to call a function in an executable file without actually having to write the code for it. This can help reduce time and effort on programming projects and make the process more efficient overall. In Python, this feature is accessed using two different functions: `__import__` and `__callable__`. These functions allow developers to create functions that can be called inside other files without requiring any coding or compilation.

The first step towards implementing ifunc-capable software in Python is understanding how these two functions work and what they do. To begin, the `__import__` function is used to load any module or package into the script. This can be done by providing the file path of the module and then calling the `import` keyword. Once imported, the `__callable__` function can be called within the module or package to call a specific function inside it. This allows developers to create functions that can be called without having to write any actual code.

The next step towards implementing ifunc-capable software in Python is understanding how these two functions work together. The `__import__` function will first look for a given file in its location and attempt to import it if it exists. If not, an error message will be displayed, letting the user know that the file cannot be found. On the other hand, `__callable__` will then look through the imported module or package and attempt to call a specific function within it. This allows developers to create their functions without having to write any actual code.

Finally, once these two steps have been completed, Python can be used to write programs that use ifunc capable software to improve efficiency and reduce time spent on programming projects. By using ifunc capable software, developers can also easily create more complex programs as they can quickly call different functions from different modules or packages without having to write any of the code themselves.

In conclusion, ifunc-capable software can be easily implemented in Python using the `__import__` and `__callable__` functions. This feature allows developers to quickly call existing functions from modules or packages without having to write any of their own code, ultimately saving time and improving efficiency while creating programs. With the help of ifunc capable software, developers can easily create more complex programs and ensure that their projects are completed in a timely fashion.

The overall operation of the project

The overall objective of this project is to explore the implementation of ifunc-capable software in Python. Specifically, we will be looking at how to use the built-in ifunc module to create a basic application that can perform basic operations such as arithmetic calculations, data input and output, and logic flow control. We will also look into additional features such as user interfaces, debugging tools and security considerations. Additionally, we will evaluate existing solutions for similar tasks in other languages so that other programmers can easily adopt our system. Finally, we will test our program on different hardware platforms to ensure its compatibility across multiple operating systems. With these objectives in mind, it is expected that a functioning ifunc-based application will be available to the public upon completion of this project.

We will approach this task by researching and familiarizing ourselves with ifunc and its capabilities. Next, we will create a basic application that can perform the abovementioned operations using the ifunc framework. Afterwards, we will work on additional features such as user interfaces, debugging tools and security concerns. Finally, we will test our program on different hardware platforms to ensure compatibility across multiple operating systems. Throughout the development process, we plan to document our progress in order to provide a guide for other developers implementing similar projects. Upon completing all objectives, a working version of an ifunc capable software shall be made available to the public.

This project will provide a valuable resource to the software community, and it is expected that ifunc will become an important part of many applications in the near future. We want to encourage more use of this powerful technology within the Python programming language by providing open-source solutions for developers.

Implementing iFunc-capable software in Python may be challenging due to several factors:

While implementing iFunc-capable software in Python may be challenging, the efforts will be worthwhile with a correctly-functioning system.

The ifunc decorator is very useful for optimizing code that would otherwise be slow. It can also help to make code more readable. Python's standard library has a number of functions that are already optimized using ifuncs. Some examples include the map, filter, and reduce functions. If you're interested in learning more about using ifuncs or other optimization techniques, there are a number of resources available online.

Popular posts from this blog

November 20, 2022
Implementation of ifunc-capable Software in Python. Python interpreter has a great module called ifunc, which provides multi-threaded, compile-time function selection. It replaces some built-in functions with custom implementations at compile time. This allows the replacement function to specialize on a particular type or set of types. ifunc is implemented as an extension to the CPython interpreter and can be used with any language that can be compiled into Python bytecode, like Cython and PyPy. This blog post will show how useful it is to use ifunc-capable software in Python. We will also give some examples of code that uses ifunc. Plan for the project This project aims to develop an understanding of the implementation of ifunc-capable software in Python. If you're a Python programmer, then you know that ifunc is a powerful tool that can be used to great effect in your programs. However, implementing ifunc can be tricky, and it often needs to be clarified how to get starte
Read more 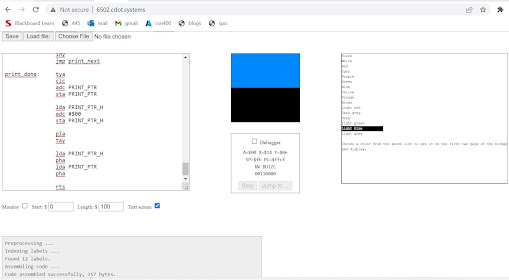 In this lab, I was asked to write a program that meets following criteria, 1. Program must work in the 6502 Emulator. 2. Output must be shown to both the character screen as well as the graphics or bitmapped screen. 3. Program must take user input from keyboard in some form. 4. Also I must use some arithmetic or math instructions For my program, I have selected one of the program wrote by our course professor. I got this program from github. As I am still learning the language, so I have decided to modify that code to produce a bit different kind of output than the original one without giving away the main intend.  So the original program would ask the user to select a color from a given list, which will then be shown in the bitmapped display. Here I have changed the input text that was asked to the user as I have modified the program in such a way that the selection prompt will start from the light green which is not at the top of the list instead of the original one which was black.
Read more